Raymond James can best be described as a diversified financial services holding company with subsidiaries engaged in investment and financial planning, investment banking and asset management. The company has seen the usage of NonStop systems change and grow through the years up to the point where today NonStop became the main system to record all holders’ accounts, trades and exchanges run on their behalf, as well as the repository for equities, mutual funds, bonds, annuities.

With business growth playing out against a backdrop of disruptive technology changes, IT moved from traditional centric computing to client-server oriented systems, reaching today the technology to support applications as services. Raymond James’ Senior NonStop System Engineer John Trizis noted that not only the NonStop systems themselves, but also thousand plus Windows servers along with the increasing usage of virtualization changed the way we backup and recover our data.

It became obvious that we simply had to reduce our dependency on physical tapes and to explore more options towards the transition from physical to virtual tape management, as the technology of NonStop systems allows to eliminate the tape without any major impact to the applications. Raymond James had a backup system in Michigan that has been replicated and moved over to a state-of-the-art data center outside of Denver, Colorado. As a result, any project involving virtual tape now spanned multiple sites, spread half way across the country. “A team was put together for the project and I was part of that main team. At that time, Raymond James was still doing backups to tape and moving them offsite, spending lots of money on tape libraries and on tape transportation back and forth between data center and its storage facility” explained Trizis.

“Shortly after I joined Raymond James the company came into contact with ETI-NET,” said Trizis. “To me it was clear that Raymond James needed a new storage paradigm and an efficient file management software in order to handle the amount of data stored across different datacenters. The solution had to consider that the source would be a NonStop system that wouldn’t detract in any way from the system’s fault tolerance or lessen the availability of the application to Raymond James users.”

At the time of the PoC back in 2008, Raymond James was running five NS16000 systems and ETI-NET BackBox came into the picture to meet all Raymond James’ requirements fully leveraging the existing Raymond James infrastructure . The transition to virtual tape went as smoothly and fast as possible. And so it began the long collaboration with ETI-NET that Raymond James continues to enjoy up to this day.

The benefit of having developed a strong working relationship with ETI-NET was that Raymond James was able to turn to them for assistance and support when it came time to upgrade to the NonStop X. 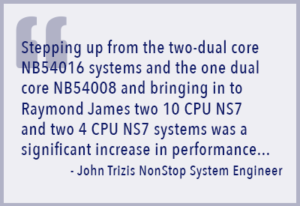 “There wasn’t any hesitation on the part of ETI-NET to support us. Unlike other NonStop vendors we had worked in the past with who were slow to move their products to NonStop X, ETI-NET did the upgrade fast and efficiently. So we had no concerns whatsoever about the ability of ETI-NET to support us,” added Trizis. “Yes, we did look at other vendors in the NonStop space, but given our history with ETI-NET, we felt confident that staying with them was our best course of action.”

Whereas Raymond James had previously relied on the three Itanium blade systems, the business growth experienced by the company drove the decision to increase the number of NonStop systems to be deployed. “Stepping up from the two-dual core NB54016 systems and the one dual core NB54008 and bringing in to Raymond James two 10 CPU NS7 and two 4 CPU NS7 systems was a significant increase in performance,” noted Trizis. “Important for the business, on the other side, was how the data has been archived and purged: deleting archived data from seven years ago it’s being done by purging 100MBytes of data. When it comes to archiving today’s data we were talking terabytes, which is thousands times more than 7 years ago. Raymond James had to recalculate its storage needs not only for the present backups and archives, but also for the future. And again, this is where working with ETI-NET really helped.”

When approached about the upcoming migration, ETI-NET COO, Sylvain Tétreault, said, “Having built the relationship with Raymond James over the course of a decade, we were in a strong position to help them with the virtual tapes; we knew just how much data was going to be involved and we built our strategy based on the capacity to handle large amount of data. That’s why, for us, it was very important to continually improve the performance of the BackBox in order to be prepared to meet our customers’ increasing backup volume. We have tested and validated BackBox with NonStop X and Raymond James saw no change in the way their applications run after the upgrade to NonStop X.” Raymond James just completed the migration and it was a great success due to strong planning and due to a product with high performance.

A decade ago, Raymond James moved from physical tapes and tape drives to virtual. “No modernization effort could seriously be addressed, if we were still chasing tapes on a daily basis,” acknowledged Trizis. NonStop systems remain central to everything Raymond James does these days. Migrating to NonStop X represents a deepening of the reliance on NonStop systems.

As for ETI-NET and BackBox, “we found the company and its products making a major contribution to the increased usage of applications on NonStop. Raymond James is both thankful and impressed by the way ETI-NET dealt with the data migration” said Trizis. 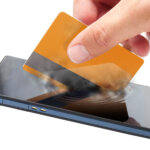 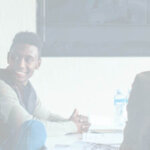