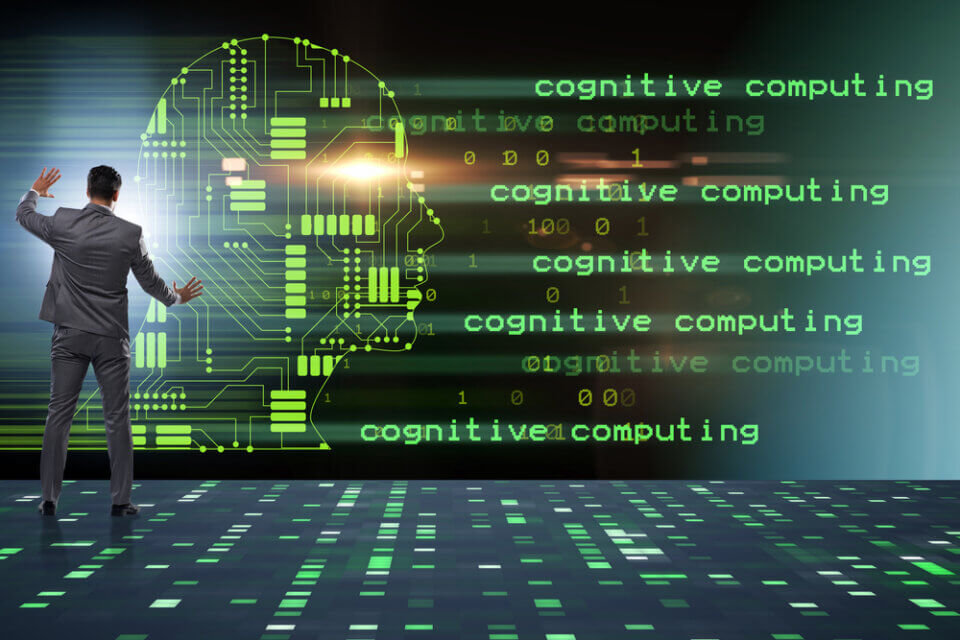 Of all the data that is available to us, only 20% [1] of it is in a structured or in a pre-defined format. The remaining 80% of the data is in an unstructured form, with most of it being textual data. The lack of structure increases complexity and makes it challenging to process data, find patterns, and apply analytics in a meaningful way. Some examples of unstructured data are documents, audio files, images, and videos. Many sources on the Internet, such as social media and news sites, create massive amounts of unstructured data.

Natural Language Processing (NLP) supports Artificial Intelligence (AI) to allow a computer to understand, analyze, manipulate, and generate human language. In other words, NLP is learning how people communicate and teach machines to replicate that behavior. Ultimately the goal is to interact with devices in a more natural, human-like way. Machines can analyze large quantities of language data more consistently and faster than humans.

Like any other AI technology, it has been around since the 1950s. In the early days, NLP was rule-based with many limitations, and it lacked a human touch. For humans, written or conversational speech comes naturally, but it is very complex to a machine to learn and achieve the same level of comprehension. The rise of Machine Learning (ML) reduced the need for rules, but it is Deep Learning (DL) that provided a progressive approach that is closer to human behavior. For more information, see my blog on ML and DL.

The recent advances in NLP are only possible due to the increasing compute capacity (Moore’s Law). NLP is now able to process significant amounts of data (text) in a reasonable timeframe with improved results. Automating the NLP process is critical to thoroughly and efficiently analyze text and speech data. Another major contributor is the recent advances, initiatives, and innovations around Deep Learning (DL) targeting NLP.

Some of the everyday use cases for NLP are:

The automated assistant: use case of NLP.

NLP is a crucial component in the interaction between people and devices. People talk to an assistant such as Amazon Alexa, Apple Siri, Google Voice, with the help of Speech Recognition, Text-To-Speech, and NLP.

The first step is to map your question (audio) to a list of words (text) with the help of a Speech Recognition engine. Then the NLP puts the words into context and tries to understand the meaning behind them. With the correct understanding, NLP can generate a comprehensive response. Finally, the generated sentence (text) is sent to the Text-to-Speech engine to deliver the answer in an audio format.

In recent years, new NLP models have shown significant improvements. We say new, but in reality, the ideas used in those models have been around for a while, but developers weren’t able to implement them successfully.

BERT (Bidirectional Encoder Representations from Transformers) is an open-source NLP model that was released by Google in October 2018[4][5]. It’s a significant milestone for the NLP world as it uses a different approach with many improved results.  Until then, the training in most models happened by predicting each word conditioned on the previous word in the sentence. The concept was to walk through a sequence of words from left to right or right to left.

What makes BERT so unique? BERT applies context that relates to all the words in a sentence. It can analyze the words in a sentence by traversing it bi-directionally (see Transformer). In other words, it can deduce the context of a word by looking at the other words in the sentence. The bi-directional aspect is one of the main features that make BERT a powerful training model for NLP. The model learns the context of a word based on all its surroundings. BERT can also be used for tasks such as “question and answering” where the relationship between two sentences is required (aka Next Sentence Prediction, NSP).

Some of the benefits of BERT:

A BERT pipeline [7] consists of two distinct phases (see Figure 2). The first phase is the pre-training phase, where large amounts of unannotated data (unsupervised) are trained into a model. The second phase is the fine-tuning phase, where the pre-trained model is used as a base (Transfer Learning) added with a small number of layers specific to the NLP task at hand. This further trains the model using the task-specific labeled data, e.g. Q&A, sentence classification or sentiment analysis. Examples of those tasks could be question & answer, sentence classification, or sentiment analysis. The fine-tuning phase is using the same parameters (weights) as the pre-training phase. 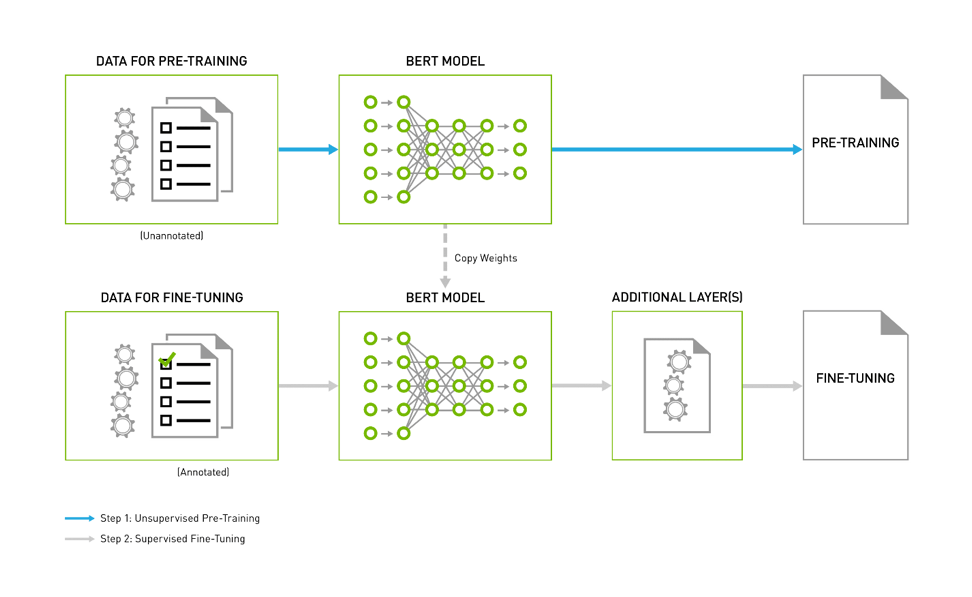 The Left-To-Right model converges faster than the bi-directional model. However, it doesn’t take many pre-training steps for the bi-directional approach to catch up and outperform the Left-To-Right method. BERT’s ability to analyze large amounts of data is vital: the more training steps (more data) there are, the higher the potential accuracy of the model. 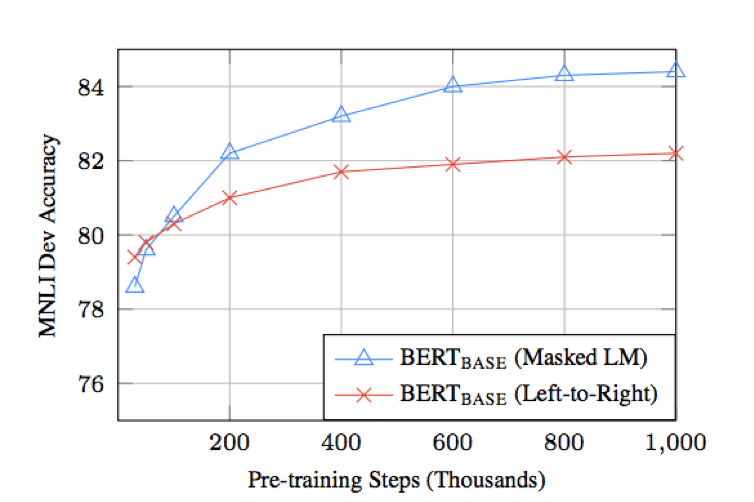 On October 25, 2019, Google announced [3] it is improving Google Search to address complex or conversational queries. The announcement referred explicitly to BERT as the neural-network technology integrated into Google Search to both ranking and featured snippets. People can search in a way that feels more natural. At first, it will be rolled out for U.S. English, followed by more languages and locations over time.

Google provided a few examples to illustrate the new capabilities. In this example (see Figure 4), the user would like to know what the visa requirements are for a Brazilian traveler to visit the USA in 2019. The query could look like this “2019 brazil traveler to usa need a visa”. The word “to” and its relationship to the other words in the query are particularly important. The previous algorithms would not be able to understand the connection and returned results for U.S citizens traveling to Brazil, which is the other way around from what the user meant. 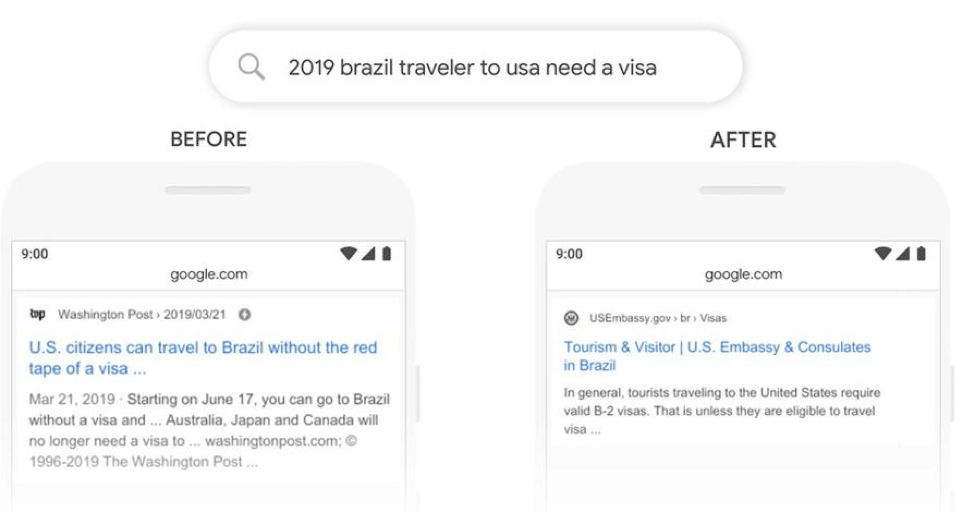 Google does recognize that BERT isn’t perfect; however, it’s a big step forward towards human understanding in Search. As with any other AI-based technology, we expect further improvements as it learns from past behaviors.

Natural Language Processing (NLP) leverages Artificial Intelligence (AI) to create the ability for a computer to understand, analyze, manipulate, and generate human language. In recent years significant progress has been made in the area of NLP. In October 2018, Google released BERT which uses the context and relations of all the words in a sentence, rather than one-by-one in order. It reveals the full meaning of a word by looking at the words that come before and after it. The bi-directional design is what makes it more useful and different from traditional models. Additionally, it can process large amounts of text and language.

The use of pre-trained models (Transfer Learning) has opened the door to many new NLP initiatives by fine-tuning pre-trained models for specific NLP tasks such as question & answer, sentence classification, or sentiment analysis.

Google announced that they are starting to use BERT in Google Search for a better understanding of queries and content.

BERT can be adapted and expanded with ease. For example, Facebook announced in September 2019 [6] that they have open-sourced “RoBERTa”. It is Facebook’s implementation of Google’s BERT neural-network architecture. They made several improvements to the model’s parameters and trained the network with an order-of-magnitude more data. 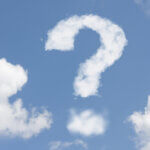 ﻿﻿SAP S/4 HANA on public cloud: It can be done, but should it be done? 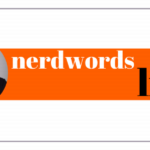 Frederic Van Haren is the Chief Technology Officer @HighFens. He has over 20 years of experience in high tech and is known for his insights in HPC, Big Data and AI from his hands-on experience leading research and development teams. He has provided technical leadership and strategic direction in the Telecom and Speech markets. He spent more than a decade at Nuance Communications building large HPC and AI environments from the ground up and is frequently invited to speak at events to provide his vision on the HPC, AI, and storage markets. Frederic has also served as the president of a variety of technology user groups promoting the use of innovative technology. As an engineer, he enjoys working directly with engineering teams from technology vendors and on challenging customer projects. Frederic lives in Massachusetts, USA but grew up in the northern part of Belgium where he received his Masters in Electrical Engineering, Electronics and Automation.”